What’s going on in Bolivia? Electoral fraud or a coup? 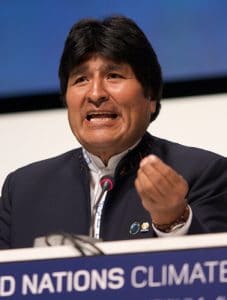 Throughout Bolivia events continue to roll over since the resignation of Evo Morales in order, as he said, to put an end to the violence that also affected his family and to pacify the country.

On November 12, 2019 he was flown out with a Mexican Air Force aircraft after accepting the offer of asylum submitted by the Mexican Foreign Minister Marcelo Ebrard. A photo in Ebrard’s Twitter account shows Morales aboard the plane with a Mexican flag.

Also via Twitter Evo Morales said goodbye before his departure with the following words:

Sisters and brothers, I am going to Mexico, grateful for the generosity of the government of this sister people who gave us asylum to protect our lives. It hurts me to leave the country for political reasons, but I will always be ready. Soon I will return with more strength and energy.

This had been preceded by days of increasingly violent protests after the controversial vote counts of the presidential elections of October 20, 2019.

On October 21, the OAS (Organization of American States) had already expressed “its deep concern and surprise at the drastic and difficult to explain turnaround in the preliminary results following the completion of the polls” in a statement.

For example, the United States CEPR (Centro de Investigación en Economía y Política, or Center for Economic and Policy Research), which is regarded as a progressive think tank, contradicted this in its statement of October 22, 2019 and called on the OAS to withdraw its press release.

Weisbrot (CEPR co-director) said it was “irresponsible” to make such accusations when there was already post-election violence in Bolivia. “Because of the constant repetition of this narrative in the media, it will take on a life of its own and be difficult to correct, even if more people look at the data or make statistical analyses.

Weisbrot also said it is “disturbing” that the OAS release followed statements made by powerful, partisan US political actors who have long opposed the Bolivian government.

Thus, Senator Marco Rubio had stated, hours before the publication of the OAS, “Evo Morales has failed to secure the necessary margin to avoid the second round (runoff)” and expressed concern that “he will manipulate the results”. Officials of the Trump Administration made similar statements.

“The OAS statement implies that there is something wrong with the vote count in Bolivia, because later reported election centers are at a different distance than earlier ones,” Weisbrot said. “But it provides absolutely no evidence – no statistics, numbers or facts of any kind – to support this idea.

“And indeed, a preliminary analysis of the voting data on all of the more than 34,000 voting tables – all publicly accessible and downloadable by anyone – does not reveal any evidence of irregularities.” (https://computo.oep.org.bo/)

Following its meeting in Buenos Aires on November 8-10, 2019, the so-called Puebla Group, which includes representatives of 32 American states, published the following statement condemning the coup d’état in Bolivia: “Once again, Bolivia’s constitution and rule of law have been violated by preventing a constitutional mandate. The serious events of recent days in Bolivia have intensified. The opposition forces have staged political mobilizations accompanied by acts of violence, humiliation of democratically elected officials, invasion, looting and burning of houses, kidnapping and threats by relatives to carry out a coup d’état and force the resignation of President Evo Morales and his vice-president Álvaro García-Linera, both legally and democratically elected” (https://www.grupodepuebla.org/grupo-de-puebla-rechaza-golpe-de-estado-en-bolivia/).

The day after Evo Morales’ arrival in Mexico, the military in Bolivia took control and opposition politician Jeanine Áñez declared herself interim president without a quorum of the legislative assembly. After this autoproclamation, Áñez entered the old government palace with a Bible in her hand. Although nobody swore her in, the military chief put the president’s sash on her and handed her the baton. …