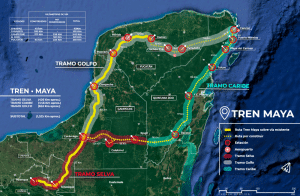 Map of the planned route of the “Tren Maya”, source: lopezobrador.org.mx

The controversial railway project is to connect the tourist centres of Cancún, Playa del Carmen and Tulúm with the most important Mayan ruins on the Yucatán Peninsula and in Chiapas over a total distance of 1500 km.

The so-called Tren Maya with estimated construction costs of the equivalent of 7 billion euros is supposed to help the traditionally poor south of the country to economic development, according to the conviction of the new Mexican president Obrador. Travelers from the Riviera Maya on the Caribbean coast will be able to reach archaeological sites such as Calakmul and Palenque in the interior of the country at speeds of up to 160 km/h.

The planned train route will cross the rainforest areas in the south of Campeche and Chiapas. Even if the route will essentially follow existing road connections, access roads for heavy machinery and construction materials as well as settlements for the workers involved in construction will inevitably cause damage to the sensitive ecosystems. The biosphere reserve of the Selva Maya is home to jaguar, tapir and howler monkey. These endangered species require large contiguous forest areas as habitats. The construction of some tunnels and bridges is not sufficient to enable the animal species to migrate.

Although the Tren Maya project met with great approval in a referendum, the indigenous Maya communities affected by the construction reject the large-scale project and criticise the fact that the entire population, often living several thousand kilometres away, was called upon to vote.

In a petition to López Obrador, in which they ask him not to build a train line through their territory, they explain, “The Mayan train has nothing to do with the indigenous Mayans, nor does mass tourism benefit the local Mayan population. We don’t want to be a new Cancún or Rivera Maya, where international hotel chains, travel companies and restaurant chains are the only beneficiaries.

Anyone who has ever been on the road by rental car on the Yucatán Peninsula and in the neighbouring Chiapas knows the advantages of a self-determined travel speed, manageable travel stages and the possibility of stopping at any time at your whim or taking detours to more remote villages, Mayan towns, haciendas or cenotes, where you will meet only a few other visitors, and will also reject this megalomaniac large-scale project.