The discovery of the Mayan world continues

In the Guatemalan Petén, that tropical and swampy lowland in the north of the country, which is home to numerous well-known Mayan cities such as Tikal or El Mirador, researchers have mapped more than 2000 km².
More than 60,000 ancient Mayan structures have been uncovered under the jungle in northern Guatemala. These include houses, palaces and a 30 meter high pyramid that was previously considered a hill.
The groundbreaking research results indicate that the Maya metropolises were much larger and more complex than previously thought. For example, extensive road networks and defensive structures indicate a hitherto unknown degree of connectedness between the settlements, whereas it was previously assumed that the Mayan culture was essentially small, independent city-states without much interaction between them.

By extrapolating data from the 2,100 square kilometre area, the researchers have also drastically revised their population estimates for the region of the Maya lowlands upwards. They now believe that up to 10 million people lived in the area, whose soil and climatic conditions were considered insufficient to sustain complex societies.
This far-reaching knowledge was made possible by the use of an aerial mapping technique known as LIDAR technology, which is revolutionary for archaeology.
LIDAR stands for light and radar, in which a pulsed laser beam is used to image the landscape by a sensor mounted on the underside of an aircraft to measure the time it takes for laser light pulses to return.
This makes it possible for archaeologists to see even through dense forests.
The data obtained can show contours close to the ground and point to man-made structures under the canopy.
“It’s like watching the sun and the stars with the naked eye and then someone invents the telescope,” says Marcello A. Canuto, Director of the Central American Research Institute at Tulane University in New Orleans, describing his experience with the project.

Exploration of flooded caves on the Yucatán Peninsula leads to finds from the Ice Age.
Archaeologists exploring the largest underwater cave in the world have also found human remains among almost 200 finds dating back to the last Ice Age. 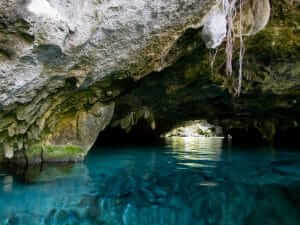 Last month a team of experts from the Instituto Nacional de Antropología e História (INAH) discovered a connection between the two underwater caves Sac Actún and Dos Ojos on the Yucatán peninsula, which together are 347 kilometres long and make the cave system the largest of its kind in the world.
The discovery was made in the context of the ambitious Proyecto Gran Acuífero Maya (GAM), in which archaeologists, biologists, underwater photographers and cave divers explore, document and map the extensive underground network of water resources.
This research has found 200 objects from different eras, of which about two thirds belong to the Mayan culture, while the rest date back to the last ice age (from 2.6 million years ago to 11700 years ago).
Among the most significant finds are also human remains, including a well-preserved human skeleton discovered far from the entrance to the cave, and a so-called concretion skull (~ covered with mineral deposits) found in a cave flooded during the past 8000 to 10 000 years.
Both finds suggest that they belong to a preceramic culture.
Among the objects found were also bones of giant sloth and gomphotheria – an extinct elephant-like mammal – as well as ceramic remains, altars, shrines and wall engravings.
The ceramics were probably used in funeral and human sacrifice ceremonies.
One hypothesis resulting from these latest discoveries is that human presence in the region dates back 9000 years, much longer than previously assumed 3000 years.
Further discoveries are likely to follow as the GAM team continues to navigate the extensive underground cave network and search for further connections with other systems that will make the world’s largest underwater cave even larger.
One of the researchers’ dreams is to break the magic 1000km barrier, which doesn’t seem utopian given the fact that there are 1400 kilometres of caves in 358 different systems in the Mexican state of Quintana Roo that are relatively close together.
Then other cave names will disappear, as in the case of Dos Ojos, which is also popular with tourists as a bathing place, since it is common in speleology for the larger system to swallow the smaller one by name.

News from the Northeast of Yucatán State

Kulubá (Culubá), a Mayan town rediscovered in 1941 southeast of the small town of Tizimín, has been restored in recent years and will be open to the public from September 2018.
The millions in investments, which have also been invested in a brand new access road and a reforestation programme, are intended to boost tourism in the region, which has been little visited to date.
Kulubá, which is home to an astonishing number of standing buildings in various Mayan styles such as Chenes and Puuc, is commonly associated with the Maya-Toltec sphere of influence of Chichén-Itzá.
One of his most remarkable buildings is a longitudinal building with a semicircular dome, which is rare in Mayan architecture.