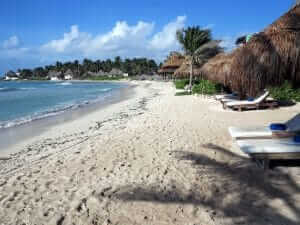 For years there has been an increasing occurrence of the stinking, all life in and under itself suffocating Tange, but it has never been as bad as this year.

Experts argue about the origin and causes of the often meter-high Sargassum carpets on Caribbean beaches from the Bahamas to the Mexican state of Quintana Roo.

Although the brown algae originate from the so-called Sargasso Sea, an area in the North Atlantic that is surrounded by four ocean currents, other scientists suspect the origin of the current plague off the Amazon estuary. Favoured by the deforestation of the rainforests there, there would be an increased nutrient input in the estuary area and thus to the extraordinary algae growth.

The Mexican population, which is heavily dependent on tourism on the country’s Caribbean coast, is facing both an ecological and an economic crisis.

For the coming high season, floating barriers, like those used to contain oil slicks, will be used. This elaborate protection is intended for the privileged beach sections (those with the most expensive hotels), but it remains to be seen whether these barriers will work and how they will survive the hurricane season.

As long as the condition persists, we recommend our customers to spend their bathing days within the framework of a trip to Mexico instead on the no less beautiful Pacific coast, e.g. in San Agustinillo, a small fishing village on the coast of the state of Oaxaca.

Here you can get an idea of the current situation on the beaches of Cancún and Tulúm: Webcam Tulúm and Cancún